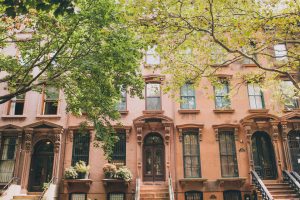 Brooklyn’s Fort Greene has developed into one of the hottest spots in the hip (and most populous) Brooklyn Borough. Neighboring Clinton Hill, Park Slope, Downtown Brooklyn, and the new Barclays Center, Fort Greene has the style and the amenities to make anyone happy.

The Architectural style of Fort Greene is classic Brownstone Brooklyn. Brownstones are Triassic or Jurassic stone that were used throughout the New York City borough, with particular frequency in Brooklyn. Brooklyn’s history is as diverse as it’s population remains, and was initially named Breukelen, by early Dutch settlers in 1646 when it became the first municipality of New York state and the design influences remain visible in many neighborhoods to this day.

Nearly every Fort Greene brownstone entryway is a double door, and usually two double-doors for added security. The exterior doors open into a waiting area, which can double as a mudroom for the rainy or snowy days that are so prevalent in the Northeast winter and spring months. And because there is a relative lack of diversity in exterior home styles, many brownstone owners use the entryway door as a means of distinguishing their home from their neighbor’s home. The use of windows or lites, or solid colors is an easy way to add a unique touch to a brownstone community without sacrificing the beautiful regal appearance from the street.